Ribbadon – The Holiest of Holies

These are days of increasing food consciousness. We care about our health, and the planet, and the well-being of the food that ends up on our plate. We want them to have had names, these animals we used to only call, “dinner.” It’s a time of increasing veganism and vegetarianism; of master cleanses and Meatless Mondays. Despite these trends, though, America continues to earn its “meat and potatoes” reputation. We eat 46 lbs of pork per person per year, 56 lbs of beef, and 83 lbs of chicken in all different shapes and forms. And in this land of consummate carnivores few forms of cookery are more American than barbecue.

I’m talking about capital “B” Barbecue here. Burgers and hots dogs over fire are fine for grilling, but ask any Southerner and they’ll spend hours telling you the difference. The low-and-slow style of roasting cheaper, fattier cuts probably evolved from Caribbean traditions, but grew into the protein powerhouse it is today in the American South. The descendants of this delicious tree are loosely identified in the different schools of BBQ – your Texas, Memphis, Kansas City, and North/South Carolina. There’s BBQ chicken, pulled pork, sausages, and brisket. And, of course, the king of them all, the BBQ rib.

There are those that will jokingly make a religion of meat. The folks that will smirk and label themselves “meatatarian” when offered anything leafy and green. While entertaining, these people do not know the true depth of meat piousness. Much like the competitive eaters who gorge themselves for the sake of personal glory or prizes, the non-serious meat follower does not know the true depth of meat devotion.

For the truly devout; the true adherents of the meat arts there is Ribbadon.

Ribbadon is not a holiday, or an excuse for senseless gluttony. It is a time of spiritual reflection. A time to reflect on the true glory of the rib. It is delaying one’s savory gratification, riding the edge of meaty desire, proving ultimate dedication by putting off that moment of meat-sweaty release.

In the words of the prophet St. Paul the Porcine, translated from the sacred texts:

“In the beginning, there was Rib Day. And it was good. The ribs were good. Pizza on the side was good. The Twilight Zone marathon, was good. All was good, and more worthy of tradition… a reason to truly celebrate Independence and devotion.

As the second or third feast was celebrated (historical record is cloudy as to exactly when), the Chosen were granted a sacred vision. Glowing coals and streams of liquid flame rained down upon the unworthy, and a storm gathered, raining barbecue sauce down on the unrighteous. But lo, those who fasted for the holy time between (yet not inclusive) Memorial Day and Rib Day itself were spared and glorified; the flesh of the damned had been transubstantiated to some pork/beef/(human) hybrid and their ribs would feed the faithful unto the end of days.

Ever since the revelation that day of the Ribture, the dietary stipulations of Ribbadon have guided the faithful from the end of May to the beginning of July, sweetening the succulence enjoyed each July 4th. As the prophet Sweet Baby Ray would evince, no ribs are to be indulged upon within the holy period.”

Uncovered that day was a true vision of meaty purity. The fast beginning on Memorial Day (non-inclusive, eat ribs on Memorial Day) and ending on July 4th (inclusive, eat ribs on July 4) allowed adherents the clarity of taste and flavor to truly appreciate the glory of the rib. Though the rewards are great, refraining from the holy meat for the full term is an enormous test of will. One more difficult than any Lenten fast, including giving up ribs. 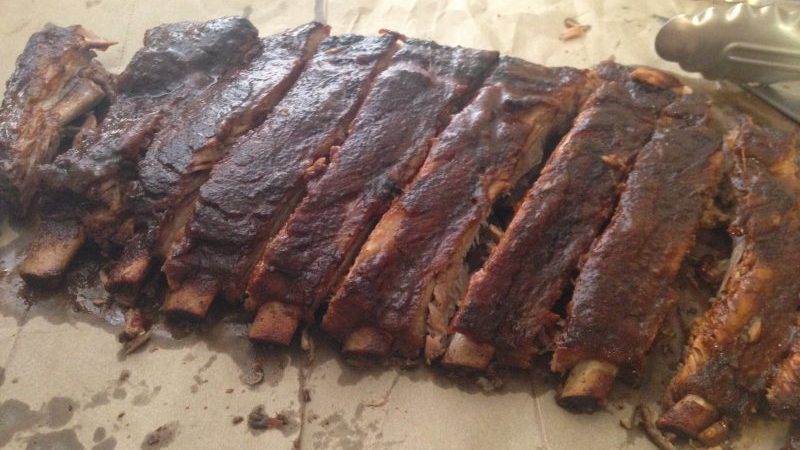 The early disciples faced hardships, but never wavered in their resolve. They knew the fast was not a choice for them. Rather, they were The Chosen to spread the meaty, saucy (unless you like dry rub) word. As Father Anthony of the First Church of Baby Back said, “I knew from childhood that I was destined for priesthood. It wasn’t until I was graced by the vision of Ribbadon that I knew what that calling fully meant.”

Though the holy season has passed us this year it is never too late to seek the light of the smoldering embers. Save your soul, and your taste buds. Be transported to another realm of flavor. Next year on Memorial Day halt your consumption of ribs and spend the next several weeks reflecting on their wonder. And then, on July 4, let your exultations join the dozens of other true believers in the great feast of Rib Day.