When I was a kid, my grandparents lived in a nearby suburb in a small ranch house on a corner. The backyard was privacy-fenced and fully patio-and-pool. Grandpa’s grill stood to the left of the patio doors as you came out from the house. To the right was a round table with an umbrella and chairs. Maybe it wasn’t round. I don’t really remember. It couldn’t have been, because I remember lots of people sitting around it at once.

There was enough space between the fence and the pool for some hostas and a sidewalk wide enough to run around, which was necessary when Grandpa threw Sam the poodle into the deep end, which he’d do several times every summer Sunday. Probably did this every day even when we weren’t there. He thought it was hilarious. Sam would scramble, desperate, to the other side while we screamed and ran from the deep end to the steps at the shallow end. Sam always made it, but you never knew when he might not. More than once, one of us jumped in to save him, his toenails digging into the sunburned flesh on our shoulders, leaving bleeding scratches behind. Sam’s predecessor, Puffy, who’d been a gift to us kids from Grandpa and who’d been run over by a car, had been replaced by Sam, but my mother had refused him. Damn dog lived to 112 so she’d ended up with him anyway after Grandpa died, but that’s another story and I was in college by then.

Anyway, summer Sundays belonged at Grandpa’s house. There were a couple years when Dad had a Fiat convertible, a two-seater but for this awful black-carpeted bench behind the front seats, and at least one of us crammed back there, towel around our neck to pad it from the edge of the convertible top digging in, knees pressed against the back of the front seats, wind in our hair, sun on shoulders, hoping the car would make it there (it didn’t always, coughing and sputtering away from every stoplight). I hear the crack of a Budwieser can opening, I’m back there. Singed-fat BBQ smoke, too much chlorine, wet dog, Coppertone SPF 4, I’m back there. Even hot concrete on my bare soles will bring me back there.

A variety of aunts and uncles and cousins would pop in throughout the day. Mom would show up with my younger brothers in time for dinner. Dad would sit at the table littered with empty Budweiser cans and argue with my Grandfather, manning the grill. Grandma mostly stood around in the kitchen, yelling at us if we ran through into the chilled dim living room to marvel at her plastic-covered furniture, the fake bird in a cage, her odd assortment of knick-knacks, or to the back bedroom with it’s two twin beds covered in shiny red satin, cool on sunburned skin.

Dinner was Grandpa’s chicken–if he served anything else aside from that and pizza, I don’t remember it. Grandpa had this knack for crisping chicken skin past the point of burned, but keeping the flesh inside juicy. It was some kind of bizarre chicken miracle. This is perhaps where I acquired my affinity for burned food. (Burn my toast, my pancakes, my chicken, but it better be tender on the inside). There would be ashy flakes of chicken skin on my hands and face after gobbling a chicken leg. And I always had to pass my bones to Grandpa. He would break them in two with his back teeth and suck the marrow out through the splinters.

I’ve been attempting to recreate the pizza for most of my adult life, but it depended upon a pizza crust that was purchased in the refrigerated section at Dominick’s. It was made by Turano. Mama Susi. It was a huge rectangle, slathered with thick sauce and a sprinkling of cheese. The 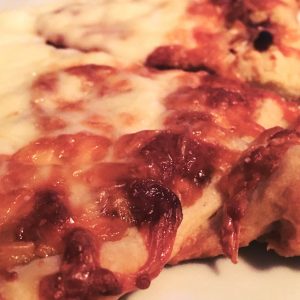 plastic it was wrapped in turned orange, as did the crust itself. You can buy an approximation of this at the Mama Susi bakery at the Turano factory in Berwyn, but it’s smaller and thicker and just not the same. But I digress.

Grandpa would chop up whatever leftovers he had in the fridge–random meats, often bacon, an assortment of cheeses, and he’d slide that thing onto the hot grill, where the bottom would crisp, the olive oil would sink in, and he’d cut it into these giant squares. Half of these would end up on a plate in the middle of the long table, the other half at Grandpa’s left, which is where I endeavored to sit. He’d always nod at that pizza pile between us and wink at me, like he was acknowledging that it was just for the two of us and other 15-20 schlumps had to share the other pile. That’s the way I remember it, anyway. Burned cheese, burned shoulders, television on, adults arguing, kids babbling, empty Budweiser cans toppling over with a hollow clatter.

I go out to eat a lot, mostly in Chicago and its suburbs, but also in Ormond Beach, Florida and the surrounding area. I road trip frequently and I’m always on the hunt for the family-owned joint that doesn’t have a square on the freeway sign under FOOD 1 MILE. If you’d like to find me elsewhere, please visit my personal website at http://vikigonia.com or my photo portfolio at http://spiritstandingstill.com. View all posts by Viki Gonia